Why do we want to do single-molecule measurements? 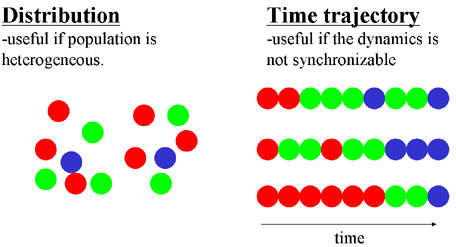 Because they are very very useful! Let’s say we want to know the exact distribution of molecular properties (for instance color of the balls in this example), the best way is to look at one molecule at a time and tabulate the result (akin to taking a census). More importantly, if a molecular property is changing in time in a complex way, single-molecule measurements are unique in measuring the entire time trajectories that include multiple pathways and intermediates.

How do we detect single molecules? 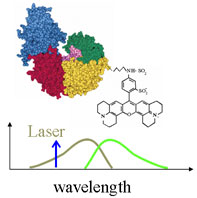 Well, it is usually impossible to detect single biomolecules directly so we use a simple trick of attaching a fluorescent dye molecule to a well-defined position on a host molecule. Then, by making the sample dilute and cutting down on the background (such as turning off the room light), we can detect single molecules. Since fluorescence signal is red-shifted relative to the excitation light, we can use optical filters to reject the scattered laser light and achieve almost background-free detection of single molecules.

So what does fluorescence tell you about the biomolecule? 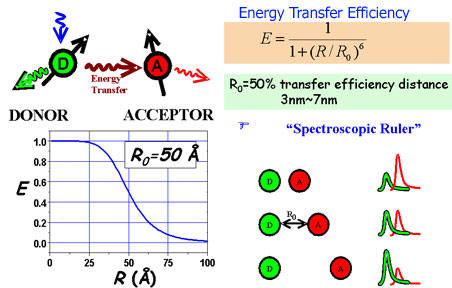 Good question! First, it tells you that it is there! Often this can be extremely useful by itself. Second, its polarization response can reveal the rotation motion of the host moleculen. Third, its brightness can change due to reactions. Finally, perhaps most general is the technique called fluorescence resonance energy transfer (FRET). FRET is measured between two dyes, donor and acceptor. If the dyes are separated by a large distance (larger than ~10nm), then there is little interaction between them and the donor will emit photons upon its excitation by laser. However if the two dyes are brought closer, the acceptor takes the energy from the donor and emit photons of different color. So

Can you measure FRET from single molecules?

Of course yes! It took us a while to develop it so we can use it reliably, but by now single-molecule FRET method is firmly established. Unlike many other single-molecule techniques such as optical tweezers, FRET measures the molecular motion in its center of mass frame, hence can achieve nanometer sensitivity relatively easily. The example shown on the right is a time record of folding and unfolding of an RNA molecule hairpin ribozyme. We attach the donor (green) and acceptor (red) dyes to the RNA so that the folded state has high FRET and the unfolded state has low FRET. We can see this beautiful two-state fluctuations in FRET values as a function of time.